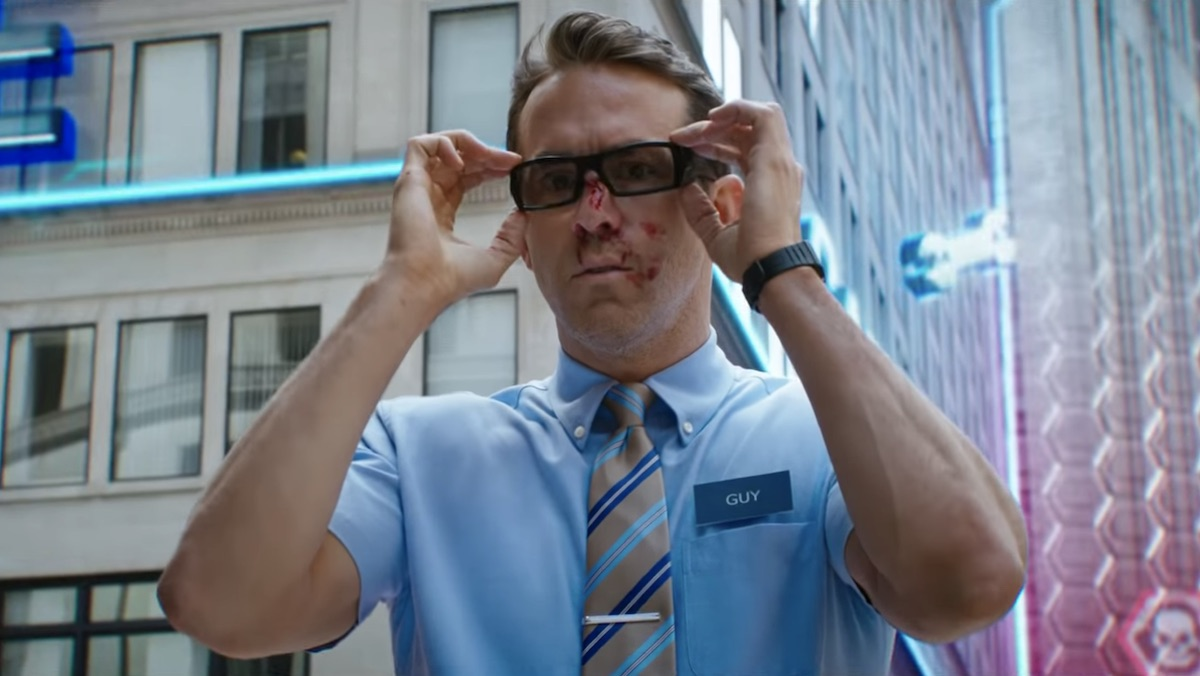 Free Guy is about an NPC achieving sentience in a metaverse that had him unknowingly enslaved to a program. (Non-Player-Characters are simulated, non-conscious characters that populate Free City, whereas the PC’s, or Playing-Characters are played by live humans.)

Guy, the protagonist, is an NPC that encounters a female PC in the film, and his attraction to her sparks something in him. He becomes self-aware. This is very problematic for the control freak CEO that owns Free City. It’s in his personal financial interest for Free City to not have that kind of spontaneous disruption to the status quo. Like Truman Burbank of the Truman show or Neo in The Matrix, Guy is a problem to the controllers once he awakens.

These movies often have significance inherent in their titles or the characters’ names. For example, The Truman Show is about Truman, “a false man,” a product of societal lies and programming, becoming a “true man” by seeing through the illusion and making his own choices despite the pressure of the controllers of the system.

Similarly, Free Guy is about an NPC slave to the program breaking free of his Metaverse-Matrix and its cycles of control. While it’s a comedy, it does have some deeper meaning to it. There’s even a bit of a flat earth tie-in: the way he breaks the matrix and its control is going beyond the artificial boundary where is a hidden land. The hidden land beyond the edge of Free City, where he’s not supposed to go debunks the whole system. The main point of the movie is that to debunk the system he has to go outside of its constraints, both mental and geographical.

The villain that controls the system and keeps all the NPC’s locked in this system is upset to have this free NPC turned Artificial Intelligence now running loose. He decides to reboot the system and reset Free City in order to stop the revolution. He tells one of his employees to reboot it–and this employee happens to have a shirt with a one hundred dollar bill on it. Now the significance here: just like the twenty-dollar bill has the Twin Towers burning on the back if you fold it just right, the one hundred dollar bill has the Seattle Space Needle and what appears to be an EMP burst above it. The Space Needle is often associated with a reset, for instance, the Great Reset was started because of the pandemic which had its “ground zero” in Seattle. Again, the one who reboots the metaverse is wearing the $100 bill design on his shirt.

One more point about this film and its predictive programming: I suspect that this “Free Guy” represents a “Free GAIA”, specifically the Global Ai Alliance of the World Economic Forum. GAIA.

The post-Great Reset world is awaiting a savior, an AI that can replace human governance because humans are flawed. With some type of global AI system, we can make everything better. Elona Musk’s baby’s mother Grimes suggested as much when she posited that artificial intelligence could make Communism work without forced labor, because as she put it in a bizarre Tik Tok video about AI and communism in which she emphasized that “enforced farming” is “not a vibe“.

This World Economic Forum’s GAIA initiative is insinuated here when Guy becomes the spontaneous artificial intelligent liberator of Free City. He eliminated the systemic corruption and causes the system to now become truly free. There’s no longer the CEO tyrant controlling Free City and turning it into a Grant Theft Auto-like nightmare world. No, now the metaverse is free and all these NPCs are becoming sentient, and it all started because of the world’s first spontaneous artificially intelligent being, named Guy.

“Gaia, significantly, is also the name of the Earth god/goddess, an earth-centered, spiritual belief that shares expressions of earth religions and paganism.

I would describe Free Guy cross between The Truman Show and They Live. As in The Truman Show, when Truman’s about to break out of the Matrix, everybody in the world is watching. In Free Guy, the entire world is watching as he goes to the edge and he breaks on through. Similarly, In They Live, the protagonist puts on special glasses so he can see the real world, the alien controllers, and how fake it all is—and he has to force the glasses on to his friend that doesn’t want to see reality. In Free Guy, there is this same dynamic: his friend doesn’t want to wear the glasses the Playing Characters wear, for fear of seeing the real world as it is rather than the illusion they were programmed to see.